In this book I finally found an answer to my question ‘Why do some trees bloom so early?’  Early spring is a hard time, when the wind and the snow keep trying to disturb those beautiful spring flowers.  In When Perennials Bloom—An Almanac For Planning and Planting (2008),  Tomasz Anisko states “Blooming may be timed so the flowers are more visible to the pollinators.  In forests, such conditions exist when deciduous trees are leafless, causing woodland floras to have many species that flower in early spring.”  Yes, it makes perfect sense.  It’s early in the season, it’s cold outside, who wants to spend all their time buzzing and hunting through all that foliage looking for the flowers?  Just show me the money!  “For flowering to be successful it needs not only to be synchronous, it also has to be precisely timed with a particular season.  Seasonality of bloom thus allows flowering to take place during periods of pollinator availability.”  Which came first, the chicken or the egg?  The flowers or the bees?  Maybe it is the sun that rules the earth.  The all great weather factor.  Weather is what gardeners are talking about all the time.  “Perennials have evolved many adaptations which not only allow them to survive periods of severe weather, but also to time their flowering so that it takes place when environmental conditions are favorable for sexual reproduction.  This, the timing of flowering, is determined in response to change in the environment and through the plants interactions with its surroundings.”

Most of the book is an encyclopedia of perennials and their bloom times, from Acanthus to Yucca.  I like the way he starts each plant section with the meaning behind each name.  For example,  Liriope is for the nymph Liriope of Greek mythology and Hosta commemorates Nikolaus Thomas Host, an Austrian botanist and physician.   The final chapter has information and floral charts to create ever-blooming borders.  The charts are easy to use and well organized, listing what is in bloom each month from April through November.  Don’t skip the introductory chapters, there is a fascinating discussion on phenology, bloom time and how perennials respond to the environment found therein.

For plants growing in the temperate zone, Anisko states that temperature is possibly the most important factor in controlling flowering.  Something most of us inherently know is that plants usually start growth only when temperatures rise above a certain threshold.  “Plants injured from extreme low winter temperatures may flower weeks or months later than normal and their bloom can be uneven, sporadic or extended in time.”

Another factor in flowering is day length.  “The response of plants to the length of day and night is photoperiodism.  The length of day precisely times flowering in the most appropriate season and  synchronizes the simultaneous flowering of all plants within the same population, facilitating the most effective cross-pollination.”  We have temperature and light, but don’t forget about water!  During the summer months, moist conditions can delay flowering, and then extend the bloom when it finally does begin.  Another great part of this book is the information on length of bloom.  The leucanthemum ‘Becky’ for instance is reported to flower for 8 weeks, while Arum italicum only for 2-3 weeks.  I would definitely recommend this book for any perennial gardener. 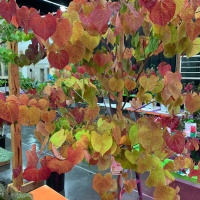