So the sun has finally stopped shining in the great Northwest and the rain has begun to fall.  Nothing is better than that first night of rainfall, when the window is open and the noise of dropping, dripping water comes gushing in.  I forgot how loud the rain is. Soothing is the sound after three months of drought.  If you like amazing pictures of our universe, check out one of my new favorite websites, Astronomy Picture of the Day.

Here is a shrub that is kind of  different.   Hypericum, or St. Johhn’s  Wort, has a colorful display of berries in the fall.  When the flowers are still blooming and some berries have formed, it’s a pretty combination. The berry colors come in red, green, orange, yellow and pink. They eventually fade to black and this happened rather too quickly with ours at the nursery. Maybe the long season of sun and drought contributed to this, but I’m not sure. These Hypericum are in the ‘magical’ series and were originally bred in Holland for the cut flower trade. They are deciduous or semi-evergreen.

It’s also the season for some hungry, munching cabbage worms.  These little green caterpillars come from the Cabbage Moth and were having an unsupervised party on this ornamental cabbage.  We called the cops and broke up the festivities. 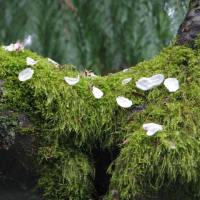