When I saw this tree last month I did a double-take.  Was it in bloom?  From the corner of my eye I noticed it awash in glowing color.  On my second look I realized it was covered in fruit.  Persistent fruit that makes this tree quite remarkable during the winter months.  ‘Adirondack’ has an interesting history.  It was introduced from the U.S. National Arboretum in 1987 and was selected for it’s disease resistance.

From the U.S. National Arboretum site…“Five hundred open-pollinated seedlings of Malus halliana were artificially inoculated with fire blight under control conditions. Of the sixty surviving seedlings, several showed field resistance to scab, cedar-apple rust, and powdery mildew when exposed to natural inoculum from heavily infected, susceptible plants during eleven years of field trial. ‘Adirondack’ was selected from this seedling population in 1974 by Donald R. Egolf and released in 1987.”   I never knew about the research and introductions coming from the U.S. National Arboretum.  They have developed and improved landscape plants and released quite a few new cultivars, including ‘Adirondack’.  They also developed neem oil products for insect and disease control.  Thank you U.S. National Arboretum!  I love neem oil, it works really well in products such as Rose Defense, which I use and trust.

Here are the facts.  Malus floribunda ‘Adirondack’ has a slow to moderate growth rate to 18 feet high.  It’s hardy in zones 4-8 and has a narrow, upright form.  The dark green foliage is highly tolerant to cedar apple rust, apple scab and powdery mildew.  Dark pink buds open to a white, slightly fragrant flower.  Abundant small (1/2″) orange-red fruit persists through early winter.  Birds enjoy the fruit after it softens from freezing.  A perfect small tree for any garden!

3 thoughts on “Adirondack Crabapple in Winter” 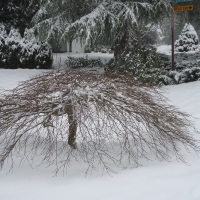