It’s human nature to pass the blame along.  No one  wants to be responsible when mistakes are made, things go wrong and problems ensue.  It must be part of our genetic makeup to point our fingers at someone or something else.  For instance, gardeners are always blaming the weather.  Especially this year in the Pacific Northwest.  The last three springs have been cooler and wetter than the previous decade that we knew.  New Zealand flax can’t seem to survive.  Escallonia hedges are worse for the wear and those adorable hebe shrubs are dropping like flies.  Even though many of the Northwest climate models are predicting warmer and wetter winters, we have been dipping below 32 degrees F regularly.  So when the vegetables won’t grow we say…blame it on the cold wet spring.  The roses are covered with fungal diseases….blame it on the cold wet spring.  No one is shopping at the local nurseries….blame it on the cold wet spring.  It’s a monster hovering over us named ‘coldwet’ and ready to ‘spring’.  But it appears that others are blaming coldwetspring, and for an unusual assortment of reasons.  In the last few months I’ve noticed three articles from the Seattle Times that have implicated coldwetspring.

In an August 23 article about algae that turned toxic in Sequim Bay, Seattle Times reporter Craig Welch wrote that scientists suspect the reason phytoplankton turned toxic was due to the successive cold, wet springs.  It is suggested that all the fresh water from rainfall has helped stabilize the water column in which algae travel up and down.  This could make it a more favorable environment for the toxic algae, Dinophysis.  This algae caused several people to contract diarrhetic shellfish poisoning and become ill after eating infected mussels.  Coldwetspring makes people sick!

In an August 31 article “Trouble in Seabird Paradise”, we learn that the Caspian Tern population on East Sand Island in the Columbia River is getting decimated by birds of prey like bald eagles and gulls.  What brought in all the predators?    Scientists suspect the cold, wet spring dumped so much fresh water into the estuary, the marine fish were driven out to sea and the birds of prey had to find a new source of food—the Caspian Terns.  Coldwetspring kills Caspian Terns!

And now for the good news, from an August 16 article “Cold 2011 has benefits: Washington Wildfires Way Down”, from the Associated Press.  The cold, wet spring has a foreseeable consequence, less wildfires.  On average Washington wildfires burn 11,000 acres each year.  This year, by mid-August, only 200 acres had burned.  Coldwetspring saves the forest!

Three seemingly random events are linked together by coldwetspring.  Toxic algae, Caspian Terns and Wildfires.  It could be a page from Hitchhikers Guide to the Galaxy….maybe the answer is 42!   We now have something to blame for all those changes in our lives, both good and bad, it’s that troublesome coldwetspring.  But the world is always adjusting and climate is the cause for many of these changes to our natural systems, especially involving plants and animals (no wildfires without plants).  This is our life in the Pacific Northwest.  Finding a new way to garden with our cold, wet spring. 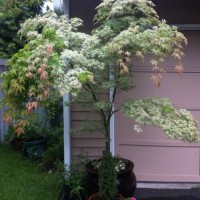